Voices of the Guardians 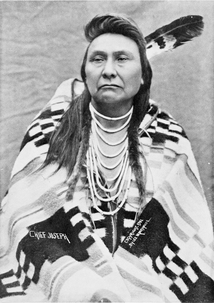 Chief Joseph
Treat all men alike. Give them the same laws. Give them all an even chance to live and grow. All men were made by the same Great Spirit Chief. They are all brothers. The earth is the mother of all people, and all people should have equal rights upon it.  It does not require many words to speak the truth.

Born in 1840 in a cave on Joseph Creek, in present-day Oregon, Chief Joseph, named Hin-mah-too-yah-lat-kekt, (which means, Thunder Rolling Down a Mountain), was a Nez Perce chief known for his courage and intelligence.  When faced with settlement by whites of tribal lands, he led his followers in a dramatic effort to escape to Canada, in what is considered one of the great retreats in military history.  Over the course of four long months, Chief Joseph led his 700 followers, (only 200 of which were actual warriors), on a 1,400-mile march toward Canada, that included several impressive victories against a U.S. force of more than 2,000 soldiers. 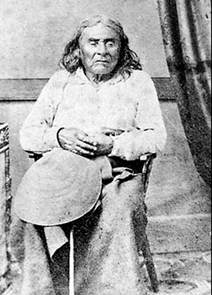 Chief Seattle
Our religion is the traditions of our ancestors -- the dreams of our old men, given them in solemn hours of the night by the Great Spirit; and the visions of our sachems, and is written in the hearts of our people.
Humankind has not woven the web of life.  We are but one thread within it.  Whatever we do to the web, we do to ourselves.

Chief Seattle was born around 1786  He was a leader of the Suquamish and Puget Sound tribes in what is
now Washington state.  He had a reputation as an intelligent and formidable leader and was known for
his compelling voice.  He was a strong chief who befriended early settlers and sought to form a blended
community, he had the desire for the two vastly different cultures to coexist in peace. His famous speech has been cited as a "powerful, bittersweet plea for respect of Native American rights and environmental values". 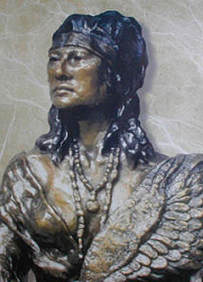 Nancy Ward
Our cry is all for peace: let it continue.

Nanyehi (Cherokee:"One who goes about") was a Beloved Woman of the Cherokee.  Beloved Women
were allowed to sit in councils and to make decisions along with the chiefs.  Nanyehi was a respected warrior and leader who was considered to be a hero of the
American Revolution.  She adovocated for peace and participated in negotiations for a peace treaty between the Cherokee and settlers and helped negotiate the 1785 Treaty of Hopewell between the Cherokee and the new United States. 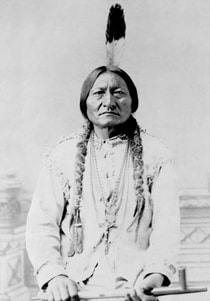 Sitting Bull
As individual fingers we can easily be broken, but all together we make a mighty fist.

Named Tatanka-Iyotanka, a Lakota name that describes a buffalo bull sitting on its haunches, Sitting Bull was born in 1831 in what is now called South Dakota.  A Hunkpapa Lakota chief and holy man under whom the Lakota tribes united in their struggle for survival on the northern plains, Sitting Bull led thousands of Sioux and Cheyenne warriors against Custer in the Battle of Little Big Horn. He remained defiant toward American military and contemptuous of American promises to the end.   He was remembered among the Lakota as an inspirational leader and fearless warrior, but also as a loving father and gifted singer,  whose deep religious faith gave him prophetic insight and lent special power to his prayers. 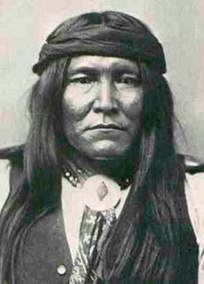 Chochise
"You must speak straight so that your words may go as sunlight into our hearts.”

Cochise was a prominent leader of the Chiricahua band of Apache Indians living in southern Arizona and northern Mexico.  For more than 10 years Cochise and his small band staved off the army waging war throughout southern Arizona.  Cochise is reputed to have been the strategist and leader who was never conquered in a battle.  By 1872, the U.S. was anxious for peace, and the government offered Cochise and his people a huge reservation in the southeastern corner of Arizona Territory if they would cease
hostilities.  Cochise agreed, saying, “The white man and the Indian are to drink of the same water, eat of the same bread, and be at peace.” 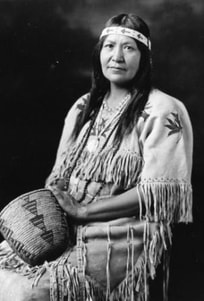 Mourning Dove
Everything on the earth has a purpose.

Born in a canoe, Mourning Dove was an Interior Salish woman who collected tribal stories among Northern Plateau peoples in the early twentieth century.  She wrote a novel Cogewea, based on her experiences.  It is the first known published novel by a Native American woman.  She spoke out for a greater tribal voice in the administration of Indian affairs.  In 1935 she became the first woman elected to serveon the council of the Confederated Colville Tribes. 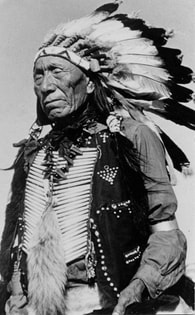 Black Elk
The sacred hoop of my people was one of the many hoops that made one circle...

A famous holy man, healer, and visionary of the Oglala Lakota (Sioux) of the northern Great Plains,
Black Elk was 12 years old at the Battle of Little Bighorn.  In 1887 he enlisted with Buffalo Bill’s Wild West show and traveled to Europe.  On his return to the Pine Ridge Reservation, he became a leader of the Ghost Dance.  The government responded with troops, and Black Elk was present at the Wounded Knee Massacre.   He later became a Christian and experienced the suffering that is often associated with lives of saints, while remaining a Lakota traditionalist. He taught that the drum is the beating heart at the center of the universe. 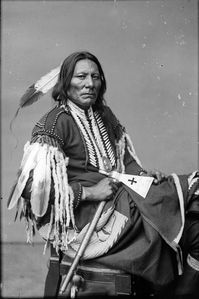 Chief White Eagle
When you are in doubt, be still and wait: then go forth with courage.

White Eagle was the hereditary chief of the Poncas in 1877.  He was.also the medicine man and religious
advisor.  White Eagle left a narrative of the Ponca removal from their lands along Nebraska's Niobrara
River. He said, in part, "The soldiers...forced us across the Niobrara...just as one would drive a herd of ponies”.    White Eagle and his followers overcame many hardships to make a home in Indian Territory.
He reported to a congressional committee in 1880.  White Eagle was a progressive leader who favored allotment.